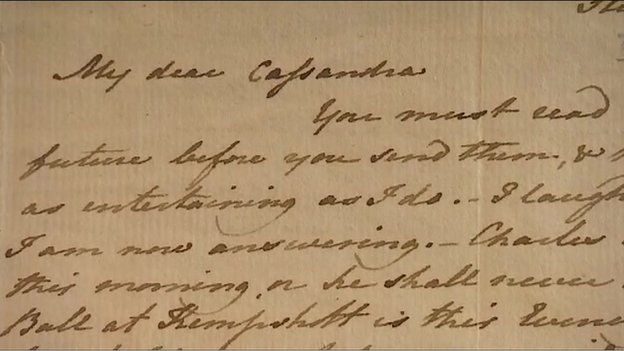 ‘You must read your letter over five times in future before you send them, & then perhaps you may find them as entertaining as I do. I laughed at several parts of the one which I am now answering.

‘Charles is not come yet, but he must come this morning, or he shall never know what I will do to him. The Ball at Kempshott is this Evening, & I have got him an invitation, though I have not been so considerate as to get him a Partner.

‘But the cases are different between him & Eliza Bailey, for he is not in a dieing way, & may therefore be equal to getting a partner for himself . I believe I told you that Monday was to be the Ball Night, for which, & for all other Errors into which I may ever have led you, I now humbly ask your pardon.

‘Elizabeth is very cruel about my writing Music; & as a punishment for her, I should insist upon always writing out all hers for her in future, if I were not punishing myself at the same time.

‘I am tolerably glad to hear that Edward’s income is so good a one glad as I can at anybody’s being rich besides you & me & I am thoroughly rejoiced to hear of his present to you.

‘I am not to wear my white satten cap tonight after all; I am to wear a Mamaloue cap instead, which Charles Fowle sent to Mary, & which she lends me.

‘It is all the fashion now, worn at the Opera, or by Lady Mildmays at Hackwood Balls . I hate describing such things & I dare say you will be able to guess what it is like.

‘I have got over the dreadful epocha of Mantuamaking much better than I expected. My Gown is made very much like my blue one, which you always told me sat very well, with only these variations; the sleeves are short, the wrap fuller, the apron comes over it & a band of the same completes the whole.

‘I assure you that I dread the idea of going to (words deleted) as much as you can do; but I am not without hopes that something may happen to prevent it.

‘Wednesday – I have had a cold & weakness in one of my eyes for some days, which makes writing neither very pleasant nor very profitable, which will probable prevent my finishing this letter myself.

‘My Mother has undertaken to do it for me, & I shall leave the Kempshott Ball for her.

‘You express so little anxiety about my being murdered under Ash Park Copse by Mrs Hulbert’s servant, that I have a great mind not to tell you whether I was or not, & shall only say that I did not return home that night or the next, as Martha kindly made room for me in her bed, which was the shut-up one in the new Nursery.

‘Nurse & the Child slept upon the floor & there we all were in some confusion & great comfort; the bed did exceedingly well for us, both to lie awake in & talk till two o’ clock, & to sleep in the rest of the night .

‘I love Martha better than ever & I mean to go & see her if I can, when she gets home.

‘We all dined at the Hawoods on Thursday, & the party broke up the next morning.

‘This complaint in my eye has been a sad bore to me, for I have not been able to read or work in any comfort since Friday, but one advantage will be derived from it, for I shall be such a proficient in Music by the time I have got rid of my cold, that I shall be perfectly qualified in that Science at least to take Mr Roope’ s office at East well next summer; & I am sure of ….. hr ‘ recommendation, be it only on Harriet’s account.

‘Of my Talent in Drawing I have given specimens in my letters to you, & I have nothing to do, but to invent a few hard names for the Stars.

‘Mary grows rather more reasonable about her Child’s beauty, & says that she does not think him really handsome; but I suspect her moderation to be something like that of W W s Mama.

‘Perhaps Mary has told you that they are going to enter more into Dinner parties; the Biggs & M r s Holden dine there tomorrow & I am to meet them. I shall sleep there.

‘Cathering has the honour of giving her name to a set, which wil l be composed of two Withers , two Heathcotes , a Blashford, & no Bigg except herself . She congratulated me last night on Frank’s promotion as if she really fears the day she talked of.

‘My sweet little George! I am delighted to hear that he has such an inventive Genius as to face-making. I admired his yellow wafer very much, & hope he will chuse the wafer for your next letter.

‘I wore my Green shoes last night & took my fan with me; I am very glad he never threw it into the River.

‘Mrs Knight giving up the Godmersham Estate to Edward was no such prodigious act of Generosity after all it seems, for she has reserved herself an income out of it still ; this ought to be known, that her conduct may not be over-rated.

‘I rather think Edward shows the most magnanimity of the two, in accepting her Resignation with such Incombrances.

‘The more I write, the better my eye gets, so I shall at least keep on till it is quite well before I give up my pen to my Mother.

‘Mrs Bramston’s little moveable apartment was tolerably filled last night by herself , Mrs H. Blackstone, her two daughters & me, I do not like the Miss Blackstones ; indeed I was always determined not to like them, so there is less merit in it .

‘Mrs Bramston was very civil, kind & noisy. I spent a very pleasant evening, chiefly among the Moneydower party.There was the same kind of supper as last year & the same want of chairs. There were more Dancers than the Room could conveniently hold, which is enough to constitute a good Ball at any time. I do not think I was very much in request.

‘People were rather apt not to ask me till they could not help it. One ’s consequence you know varies so much at times without any particular reason.

‘There was one Gentleman, an officer of the Cheshire, a very good looking young Man, who I was told wanted very much to be introduced to me; but as he did not want it quite enough to take much trouble in effecting it, we never could bring it about.

‘I danced with Mr John Rood again, twice with a Mr South a lad from Winchester who I suppose is as far from being related to the Bishop of that Diocese as it is possible to be, with G. Lefroy & J. Harwood, who I think takes to me rather more than he used to do.

‘One of my gayest actions was sitting down two Dances in preference to having Lord Bolton’ s eldest son for my Partner, who dances too ill to be endured.

‘The Miss Charterises were there, & play’d the parts of the Miss Edens with great spirit . Charles never came! Naughty Charles. I suppose he could not get supersided in time.

‘Miss Delaney has replaced your two sheets of Drawing paper, with two of superior size & quality; so I do not grudge her having them at all now.

‘Mr Ludlow & Miss Pugh of Andover are lately married, & so is Mrs Skeete of Basingstoke & M I French, Chemist of Reading.

‘I do not wonder at your wanting to read first impressions again, so seldom as you have gone through it & that so long ago.

‘I am much obliged to you for meaning to leave my old petticoat behind you. I have long secretly wished it might be done, but had not courage to make the request.

‘Pray mention the name of Maria Monteson’s love when you write next. My Mother wants to know it & I have not courage to look back into your letters to find it out .

‘I shall not be able to send this till tomorrow, & you will be disappointed on friday; I am very sorry for it , but I cannot help it.

‘The partnership between Jeffery s Farmer & Legge is dissolved the two latter are melted away into nothing, & it is to be hoped that Jeffery s will soon break for the sake of a few heroines whose money he may have.

‘I wish you joy of your Birthday twenty times over. I shall be able to send this to the post to day, which exalts me to the utmost pinnicle of human felicity, & makes me bask in the sunshine of Prosperity, or gives me any other sensation of pleasure in studied Language which you may prefer.

‘Do not be angry with me for not filling my sheet & believe me yours affec : J . A.