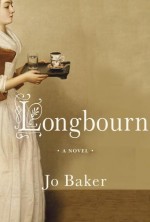 Jo Baker’s Longbourn (The Servant’s Story) is a somewhat radical departure from the majority of Pride & Prejudice paraliterature, which generally – even if it views the action from a completely different perspective – still keeps the events in Austen’s original story front and centre. In Longbourn, these events are only presented as sideline blips on the radar in the day-to-day lives, trials and tribulations of those who serve the Bennet family. They have more pressing things to think about!

Different perspective
The story is told primarily through the eyes of Sarah, the ‘head’ housemaid under Mrs Hill who, along with her husband Mr Hill, a second, younger housemaid-in-training named Polly, and the mysterious James who joins the household as a manservant, form the main cast of characters. And in reading about what they have to do behind the scenes to keep a ‘gentleman’s family’ running in the smooth and well-ordered fashion required, you get a completely different perspective on Pride & Prejudice and life in the Regency world in general.

Intriguing
One of the things I found most intriguing was how the story managed to show that while the Bennet family (with their relatively modest and entailed estate) was positioned in Austen’s novel as somewhat ‘hanging on’ at the edge of gentile prosperity, they were still SO much more pampered and privileged than they could ever imagine compared to the lives of those who worked for them. Seen through the servant’s eyes, you realise how much hard work others had to do to help ensure the nice and proper home, clothes, food, and entertainments that the Bennets needed to present to the outside world as a gentleman’s family – and expected as their due.

So… how does it come about that the mysterious James is suddenly added to the household, Hmm….?

Mysterious
The fact that there are only four servants to start off with says enough – the capable, strict, but (underneath it all) warm-hearted Mrs Hill who acts as both housekeeper and cook (with assistance from the housemaids), her husband who is a de facto butler, handyman and groundskeeper, and then Sarah and Polly – both of whom were taken out of orphanages as children and trained in-house to be servants. The Bennets are not a family who can afford a lot of them. So… how does it come about that the mysterious James is suddenly added to the household, Hmm….?
As all these characters go about their business, you do touch base now and then with specific events in Pride & Prejudice – such as when Sarah helps Elizabeth dress for the Netherfield ball, or Mrs Hill is anxiously fussing about preparing the bedroom for Mr Collins’s (her potential future employer!) as perfectly as possible. Those scenes not only make you see the Pride & Prejudice story in a broader perspective, but get you really involved in the lives of these people who – without the resources of having been born into a ‘gentleman’s family’ – are still hoping for and struggling to achieve a relatively dignified and happy life of their own.

Jaw-dropping
Social iniquity, the Napoleonic war and slave trade – none of these are issues that Austen dealt with. All of them move more to the forefront here, but not in an manner that makes for a pedantic or unpleasant reading experience. To the contrary! As the plot progresses, these elements work together within the P&P background to throw a few really jaw-dropping twists at the reader, as well as to give an unexpected “downstairs” mirror to the hopes, dreams and romances developing “upstairs”. Jo Baker has a great writing style and has used it to put together a very good and gripping story that will now always make me look at Pride & Prejudice through very different eyes.