Since 12 years Hazel Jones runs courses about Jane Austen in Denman College. Denman College is a beautiful Georgian house in a small village close to Oxford, England. It belongs to the Women Institute and is used as a centre for learning.

The house itself has various ensuite bedrooms, but there are also new build bedrooms close by. The food experience at Denman is a real treat. Between breakfast, lunch and dinner you get spoilt with fresh baked cookies and cakes. 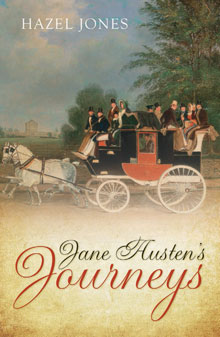 In March this year I followed the course “Jane Austen and journeys”. The course started on Monday evening with a short introduction about travelling in Jane Austen’s time. The group consisted of 10 women, most of them had already followed more courses with Hazel. The next days we started at 9.30 hrs till the end of the afternoon, but with enough short breaks and spare time if felt quite relaxed.

The course was really informative and it made you realise how lucky it is to live in the 21st century, especially for women. Jane travelled quite a lot in England, she adored England. But being a woman, she could not travel on her own, she was always dependent on one of her brothers to accompany her. Sometimes this was quite frustrating, especially when her brother Henry, with whom she travelled most, had suddenly other plans.

The course was really informative and it made you realise how lucky it is to live in the 21st century, especially for women.

Emma is an exception

Nearly all her female characters in her books travel, only Emma is an exception. Travelling brought them out of their comfort zones and was also a learning experience. As she writes in Northanger Abbey ‘if adventures will not befall a young lady in her own village, she must seek them abroad’.

Travelling and visiting big houses became quite common around this period. Because England was in war with France, people did not travel abroad. The roads improved, usually paid by landowners, who asked for toll.

Two famous travel writers in Jane’s time were the quite grumpy and complaining Captain Byng and Johanna Schopenhauer from Poland. Her travel book A lady travels: Journeys in England and Scotland gives a good impression about travelling around 1800.

I found the course really interesting, relaxing and fun as well, especially watching quite a few short parts of the movies and series of the books, relating to travelling. Also the day outing to Stoneleigh Abbey and Aldestrop, home of Jane Austen mother’s cousin Rev. Thomas Leigh was really pleasant.

If you want to read more about travelling around 1800, you can order Hazel’s book Jane Austen’s Journeys at www.amazon.co.uk or www.janeaustencourses.co.uk.

Her excellent book Jane Austen and marriage, first published in 2009, is now available in paperback for 12 pounds (published by Uppercross Press) and can be ordered from Hazel’s website www.janeaustencourses.co.uk.

At the moment Hazel is busy researching information about the Knight nephews for a new book.

If you want to indulge yourself in a few days Jane Austen, taught by an excellent tutor, in the English countryside, please visit Hazel’s website: www.janeaustencourses.co.uk.

The following courses are at the moment on the calendar: