Balls, Assemblys, and dancing in general play a prominent role in Austen’s work. And no wonder – they gave young, genteel, unmarried men and women one of the only opportunities they would ever have to spend time and freely converse with members of the opposite sex. In an exclusive interview for JaneAusten.nl, Paul Harris, choreographer for, amongst others, Sense & Sensibility (2007), Emma (2009) and Miss Austen Regrets, talks about how he came to translate such ‘hidden emotion’ to the big screen.

Paul Harris began dancing at the age of eight, and went on to become one of the world’s most successful ballroom dancers ever, winning top international honors in major competitions as a youth and adult. He later studied dance in many forms, from ballet to tap and historical dancing. Eventually, he studied acting at Drama school, subsequently playing leading roles in numerous British television and West End theatre productions. In 1997, he began combining his dancing and acting skills, and since then has become one of the UK’s most prolific choreographers and dance instructors in film, television and theatre.

You’ve gone from dancer to actor to choreographer – how did that come about?
In my youth, I was the equivalent of World Champion in ballroom dancing. But by my late teens, I was already exploring ballet and other forms of dance. My thinking then was already broader than the field of dance I was involved in. Eventually I met and married an actress, which opened up a whole new area of interest. I quit dancing, and studied acting at the Academy of Live and Recorded Arts in London. In one of my professional acting jobs, I played a dancer on the TV series ‘Casualty’ – a kind of British E.R. I didn’t want anyone else doing the choreography – and the girl who was cast as my partner was someone I’d worked with in West Side Story in the West End – so we were able to get together and do what we wanted in terms of choreography.

When the program was broadcast, I was contacted by the owner of Pineapple Agency – probably the most influential dance agency in Europe. In our meeting, he said “You should really think about this”, he said. I just answered, ‘I don’t really dance anymore – I’m an actor!’ But three months later, he called about a script they wanted someone to look at. It was set in the period when Strauss was touring London, and the dancing in it was about 100 years out of date. It was also about an aristocratic family, so they had to be doing a waltz or polka, not a polonaise! The writer confirmed my take on the situation, and I got the job. The second I walked into the rehearsal room and started working with those actors, I knew that’s why I went to drama school. Not to be an actor, but to be able to understand and contextualize how dance and movement – in all its ways – can serve a story. 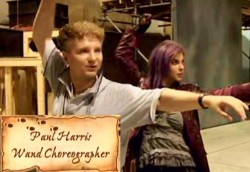 So choreography – as you approach it – is not just about dance steps but body language in general?
Yes, absolutely. I’ve coordinated and worked with actors on dance scenes in many fantastic period dramas, but the two biggest ‘blockbusters’ on my résumé are obviously ‘Harry Potter & the Order of the Phoenix’ and ‘Entrapment’ – neither of which are actually dancing! For the first, I developed the so-called ‘wand language’ that determined how the actors moved and fought with each other in the big combat sequences. For the second, I determined and worked with Catherine Zeta-Jones on how she made her way through the laser security system in the scene that many find the high point of the movie. But the common denominator in everything that I do is furthering the story through movement in a way that serves the script.

Are you a fan of Austen’s books?
I had read Pride & Prejudice in school, but I hope you won’t hold it against me if I tell you that I didn’t go on to read everything! On the other hand, when I get a job such as an Austen, I always read the book. Just like an actor who has to play a role, the source material can give you very important information you need to know to do your job well.

In terms of dance, your area of expertise has a remarkably wide scope, but seems to be specialized in Latin dances, such as Salsa and Meringue, for which you have written authoritative books. How does your work in historical dancing fit into this?
What I find interesting about historical dance is how it bridges the cultures and centuries in terms of social politics. What is permitted in public, and what’s not. Also, you want to be as historically correct as possible. The waltz just started its advent at the end of Austen’s life, but as an artist and writer in the countryside, was she aware of this new dance movement? We had extensive discussions about that with Emma, as I wanted to use a ¾ waltz rhythm in the very important ball scene. There are great similarities between social dances of all periods. The scandal that accompanied the Tango in the early 20th century for example, had already been seen with the Waltz at the beginning of the previous century!

Lots of people think that filming period dance scenes presents problems. I don’t. Obviously, you have to work intensively with the lead actors, who have often never danced before. But I always make sure that everyone who is cast as a dancer in a ballroom scene knows what they’re doing – or will be able to catch on very quickly. We only had one day for the rehearsal of entire ball in Emma – which is not very much! I understand that for the movie of Pride & Prejudice they had a week! With that kind restriction in mind, I simply cannot have absolute beginners, or extras I’ve never met before as background dancers.

And how do you approach the lead actors?
I relate to each of them differently. But I always ask them about their characters to start with. ‘Would they do this or that’? Some of them say, ‘Well, I would react to them in this way – but I don’t think my character would do such and such’. Olivia Williams was really quick. She came in and it was like….‘ok, what do you want me to do?!’ She was a real natural talent. Johnny Lee Miller was a little tentative with dancing at first I think. He didn’t say so, but I felt he was a bit intimidated by the idea of having to do these dances. But by the end, he was great though, and really enjoying it too, I think. David Morrissey, who played Colonel Brandon in Sense and Sensibility, was also a very good mover.

Many Austen fans consider Ginny’s Market, the all-important dance between Emma and Knightly in the 2009 miniseries, as the most evocative and pivotal dance in any Austen filming ever. Could you tell us a bit about how it came to be? Ginny’s Market was choreographed primarily to facilitate particular camera shots Jim O’Hanlon wanted to get in order to tell the story the way he wanted to. As such, it was not really a ‘proper’ working dance set, but designed to capture pivotal romantic moments during the dance, as we saw it. Romola Garai and Johnny Lee Miller had to stay together throughout – so no changing of partners – only places. They also had to finish last, because Jim wanted a shot of them dancing directly down the set towards the camera. I explained to Jim that a ‘long set’ in 3/4 time would allow him to capture everything he wanted, and I also worked in close collaboration with the composer, Samuel Sim, in putting Ginny’s Market together.

Emma and Knightly start and end the dance at the top of the step. During the screen time in between, you see their relationship developing in a whole new way. The ‘acknowledgements’ – the repeating bow and curtsey built into the dance as each new sequence starts – allowed for very important shots of both that hint at the changing nature of their thoughts and feelings, and which coincide with the building up of the music.

It was often in these kinds of dances that Austen’s characters got to know and learn about each other in very important ways. And although not all of them led to happily-after-afters, a lot of them did. And if my vision as to how that could best be shown on film pleases Jane Austen fans, well, then, I’m happy too.